Paired up with the popular "like" button, the new "send" button allows you to send a web page to a select list of your fb friends. So, it's similar to an "email this" button, but it's connected just to your list of facebook friends. That's the marketing potential behind it: the power of word-of-mouth recommendation.

Just as when you send a message from within fb, it will intelligently complete names as you begin to type in the recipients. Once you place the code on your site (if you use the XFBML code), all previous likes will be computed and displayed. Also, the first person who clicks on the send button, once it's installed on your web page, will have a thumbnail of their fb profile pic displayed and their name. The next person to like it from your web page, will have their photo displayed, and name. etc.

Note: If you don't want faces to be shown of "likers" then in the code (show_faces="true") change "true" to "false" (show_faces="false"). Also, experiment with placement. While "like" buttons often appear at the top of an article/video/other item, this strip of code (like button + send button + how many friends have liked it so far) makes the loading of pages on my drupal site go through one additional "click/hiccup"--at least in IE.
Posted by Sherrie Gossett at 3:16 AM

Want to get a Drupal site up quickly, without having to deal with code, installation, maintenance, etc.? there are two good solutions: Drupal Gardens (from Acquia) and buzzr.com (from the good folks at Lullabot). Both offer intuitive admin functions and pre-built templates which can easily be customized. Great way to benefit from the powerful SEO boost Drupal offers as well as its versatile functionality.

There's a lot you can do with these two tools...e.g. creating feed aggregators as a traffic draw. Common features: FAQ, blogs, forums, video galleries, twitter feeds, event calendars, newsletter sign-ups, and of course, allowing users to become a member of the site.

Also: Lynda.com offers a course in Drupal Gardens.
Posted by Sherrie Gossett at 12:34 AM

Chris Williams built this elegantly simple and effective site from nothing but couchdb + javascript. Site features short interviews with the creator of javascript. Nice.
Posted by Sherrie Gossett at 8:42 AM

The Capitol of Insider Trading 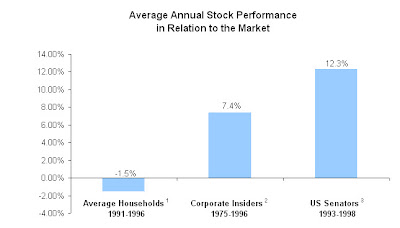 Roger Donway blogs today: Are Congressional Staffers Engaged in Insider Trading? Brings to mind a 2004 study I read that "showed that Senators' stock sales and purchases combined outperform the market by 97 basis points per month, or 12.3% per year." Read the conclusion of that study here. Related: Insider Trading Inside the Beltway.
Posted by Sherrie Gossett at 5:10 PM

Useful and fun. Enjoyed meeting the folks from Top Floor Studio as well as Doug Vann, John Paul McNeal, and many others. I often find that at conferences, sometimes the most valuable information exchanges are the casual ones that transpire during breaks. Heard DrupalCon Chicago '11 is expected to draw a ridiculously large crowd. (Reserve early). And the NYSE, which dropped some expensive propreitary web solution in favor of Drupal, is set to release a slew of Drupal-based sites before year's end.
Posted by Sherrie Gossett at 10:34 PM 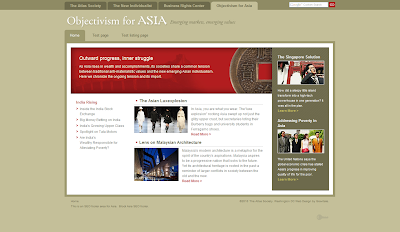 For those who haven't seen it yet, this is the "Asia" section of our new website, scheduled to launch this spring. Right now the posting process is underway, with the large amount of content we have being posted, with SEO edits, to the site database. As you can see from the tabs at top, there are 4 main sections, including one for our magazine, The New Individualist, a new Business Rights Center (which I successfully lobbied for), and the Asia section.
Posted by Sherrie Gossett at 3:29 PM 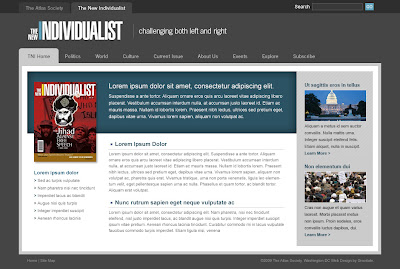 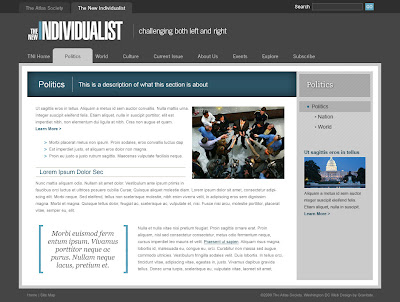 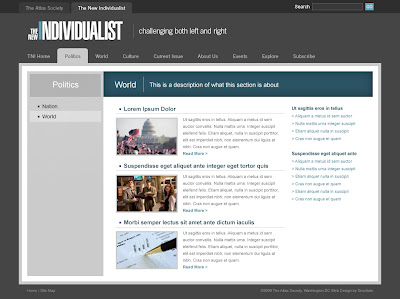 Posted by Sherrie Gossett at 12:23 AM 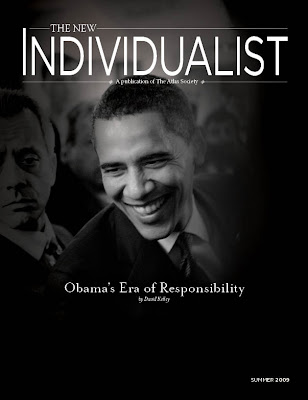 Here's a cover shot of the current TNI winging its way to mailboxes. Click here to take a peek at the table of contents. (The contents will be posted after subscribers receive the issue.)

The design of the new TNI web home is complete and the programming is underway. I'll post some sneak peeks of that next week.

We received overwhelmingly positive reactions to the re-conception and redesign of TNI. You'll be a able to read some of those responses in the "Letters" column of this issue.

An excerpt: From Roger Donway's review of Malcolm Gladwell's Outliers:

"Obviously, Gladwell is not interested in the statistical phenomenon of outliers. He is interested in what workaday journalists would call 'stars and superstars.' But designating 'stars and superstars' with the seemingly scientific term 'outliers' is the sort of trick that makes Gladwell a, well, superstar among journalists—and probably an outlier where salary is concerned, too."

"The welfare state that liberals built in the 20th century removed major areas of life from individual control and responsibility. The state will educate our children, so we are not responsible for paying tuition or for deciding what curriculum our children need. The state will give us a pension and health care when we retire, so we are not fully responsible for saving. The state will screen the food and drugs we buy, so we are not fully responsible for deciding what to consume. Although communitarian sentiments were always one strand in the liberal case for the welfare state, liberals tended to put more emphasis on enabling individual autonomy by ensuring the conditions for individual self-actualization. In Obama’s quest to expand the welfare state, and the role of government in general, this quasi-individualist strand plays a much smaller role; the claims of community as an end in itself loom much larger."

Posted by Sherrie Gossett at 5:04 PM

This item, listed on the Drudge Report, TIMES sells, leases back part of building... , brings to mind the controversy over how eminent domain was used to obtain the site.

If you missed the old story, here's a recap from Wikipedia:

"The site for the building was obtained by the Empire State Development Corporation (ESDC) through eminent domain. With a mandate to acquire and redevelop blighted properties in Times Square, ten existing buildings were condemned by the ESDC and purchased from owners who in some cases did not want to sell, asserting that the area was no longer blighted (thanks in part to the earlier efforts of the ESDC). The ESDC though prevailed in the courts.[1][2]

Posted by Sherrie Gossett at 6:13 PM